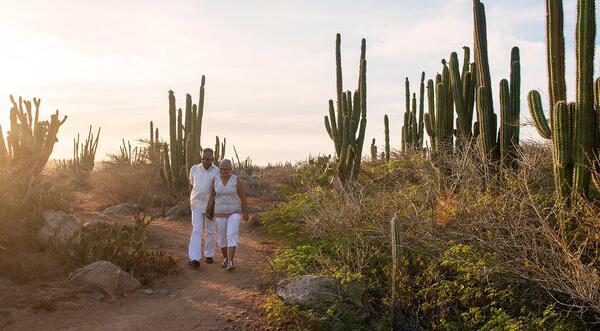 Winter is coming, and the Aruba Tourism Authority is hoping to motivate some vacation planning with a campaign launching today.

The integrated campaign features dozens of Arubans, making a human connection between “One happy island” and its visitors — a connection today’s experiential traveler craves, according to the tourism group.

One- to two-minute videos highlight the island’s attributes that are culinary (Samil), cultural (Vanessa) and romantic (Lilian).

Three 30- to 90-second videos feature residents who give mini-lessons about the culture and flavor of the island, including Frank (who explains the Papiamento language — “Cerbes Friu” equals cold beer): Irina (discussing Aruba’s Carnival costumes) and Sergio (helping visitors eel the rhythm of Aruban music).

The campaign also includes GIFs and interactive content across TV, digital, social, native, influencers, print, out-of-home and trade shows. It all can be found on the Aruba Tourism Authority’s website. The tagline for the effort is: “Our happy island. Your happy island. One happy island.”

The campaign does more than just present activities in a beautiful setting, says John Speers, strategy and client director at Concept Farm. “The storytelling drives real emotional engagement and conversion.”

The agency uses a process called the “Brand Being,” which unearths the human essence of a destination.

“There’s much talk of ‘engagement’ in the business, but at the end of the day, people engage with people, not things,” he says.

The campaign will be featured in an installation throughout the Metro-North platforms at Grand Central Station from Oct. 29 to Nov. 24, including more than 140 panels highlighting a sweepstakes to win a trip to Aruba with a stay at the Ritz-Carlton. The installation is specifically tailored to the environment using headlines such as “Take The Express to Local Aruba” and “Take a paddle board, not a train.”

The agency shared metrics from earlier executions for the Aruba Tourism Authority. The local-focused content resulted in YouTube completion rates over four times travel benchmarks. There were 6 million publisher video views and over a million social views, with average engagement 87% above Facebook benchmarks.

Aruba has experienced record-setting visitation increases over the last five years with a 10% increase in 2017 alone.. North American visitation has grown to nearly 700,000 per year and Aruba has set the pace for the Caribbean with nearly 85% hotel occupancy rates. Commensurate with those big numbers comes an increase in on-island spend, which is critical as Aruba is the most tourism-dependent island nation in the Caribbean.

Digital drives the travel industry today, but it can also factor out the human element (with online booking, etc), Speers says. Creating a personal connection is difficult, which is why this campaign succeeds on so many levels by putting the human back into the digital in ways that create a true two-way dialogue, he adds.