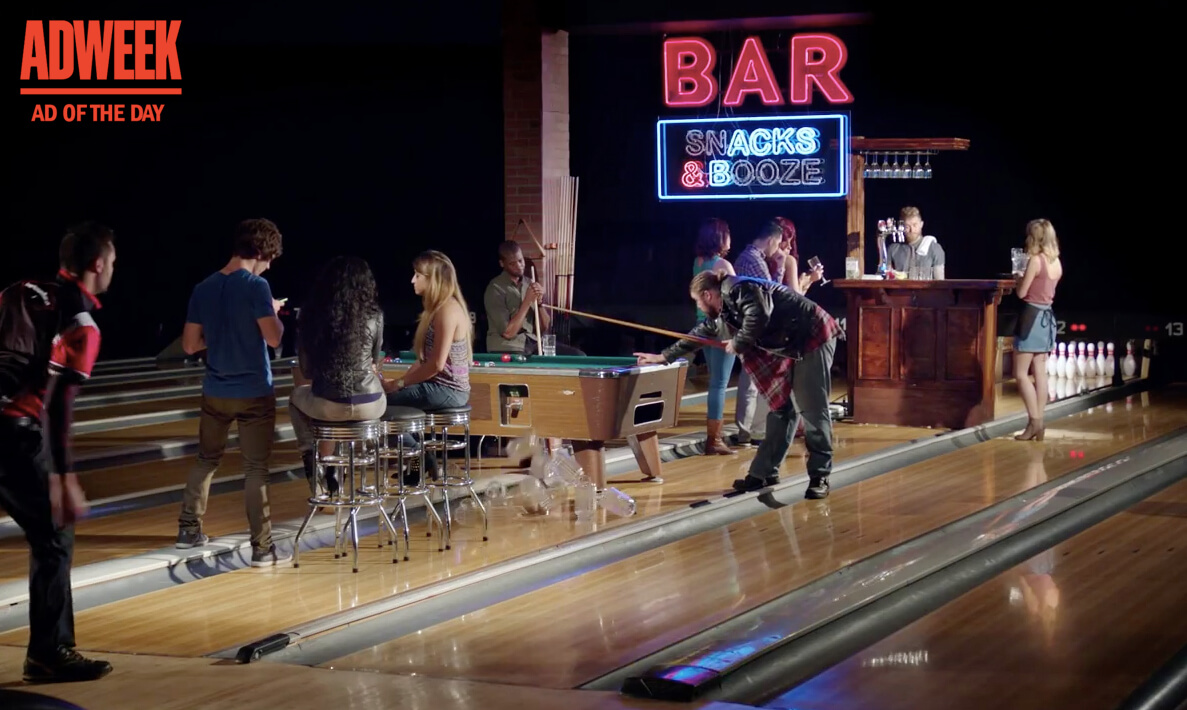 Bowlmor AMF literally bowls over the competition in this amusing spot from New York agency Concept Farm, starring pro Jason Belmonte, who targets your alternate Saturday night plans and smashes them to bits.

Belmonte is known in part for his skill at trick shots, and they come in handy here. The spot—from directors Ben/Dave (Ben Hurst and Dave Thomas)—is styled as an infomercial, with Belmonte performing never-before-seen trick shots in front of a live audience. Set up on the bowling lane are typical Saturday night scenes—a bar, a restaurant, a nightclub—which Belmonte bowls right through, to cheers from the crowd.

Bowlmor AMF, the largest operator of bowling centers in the world, is targeting millennials with this campaign. Its previous campaign was the first national advertising campaign for a bowling center brand in over 40 years. This one carries the simple message that you don’t have to do the same mundane things every Saturday—that you can break your routine for a fun night of bowling.

“The shoot was wild, to say the least,” vp of marketing Colie Edison told Adweek. “When the directors saw the boards, they said, ‘We’ve never seen that before.’ We knew that was a good sign.”

The shoot wasn’t without its risks. “Everyone knew that a bowling ball at that speed could easily shatter an ankle,” said Edison. “Then came the moment of truth when everything was in place and Jason had to throw … and remember, the goal was to not just crush the scene but to hit a strike. It was then Jason got into the zone, focused and delivered.”

Concept Farm had worked with Belmonte before on an ESPN project. “So we knew he was not only skilled on the lanes, but quite comfortable and engaging on camera,” said Edison. “We were planning and ‘pre-producing’ over six months prior to the shoot itself. He had to help us understand what he could physically do with the ball in order to for us to push the boundaries on the creativity and difficulty of the tricks. … Jason was completely involved in the creative process, up for anything, and actually made the tricks harder for himself in some ways. We had to factor in the speed, rotation and trajectory of Jason’s throw along with the oil pattern on the lane.”

This new creative is part of a three-year, overarching brand campaign that aims to establish Saturday night as “Bowling Night in America.”

The new campaign will span TV and digital, including ESPN and Bravo as well as Hulu and YouTube. The campaign launches today, and spots will air throughout the fall in both 30- and 60-second units.